I arose early, and took care of a few details: vacuming; windows; and documentation, then left for the 4th Annual Cleveland Euro Car Cruise-In, in Olmsted Falls.

The were many cars here, including British, Italian, and German.

I shared the event with Chuck Linick.  It was at a German Club, and we ate inside.

Prizes are raffled off: I won a few small ones:

Back home, we had pizza brought in, and then rode our bikes for 19 minutes, before watching Poldar, so Sharon can keep up on history!

Cruised in our 2015 MINI Cooper S  (Rhoda) from Cobleskill  (where we stayed in the Best (Western)),to Lake Placid in NY through beautiful country!

We arrived at the White Face Lodge (Home of the Politically Correct Names), to our suite:

We ate in the main restaurant

And, after all of this scenery and luxury, to cap it all, there was the…

JAZZ in the restaurant…

We had lunch at B-Spot, after a stop at Office Max where I had some Russian Reference card made.

We plan to Join on Wednesday.

Our year began with our daughter Valerie contracting  meningitis, but thankfully she recovered in time for a trip to FL in March,

which was great, although we missed Allen and his wife Sarah, as they had to attend a company event, and, meanwhile, back home, always working on Mini,

we took time out to celebrate Sharon’s birthday, and

my political activities continued nonstop including covering for a paper the teacher’s strike in Strongsville, and

a parade in Avon,

a demonstration on Cleveland’s Public Square,

and a big AU event,

and for a change of pace with me competing in ballroom dancing in Michigan,

and after that, Sharon and I went to Columbus for a weekend and then to Chicago to see the town, and the Stephanie Miller show

while back home our master bath was being updated,

(that project ended in June!), meanwhile improving our 1960 Mini and taking first at both Ursuline and Shaker shows,

and we took some time out to socialize, celebrating my birthday May 11,

and Valerie’s in Columbus,

and a retirement party,

which inspired Sharon to have some former colleagues over,

we also went to Pier W,

as well as enjoying some local shows, and ballgames,

studying Russian with my great teacher Daniil (at coffee houses),

and enjoying a cruise in Mini to Vermilion, where  Sharon grew up, where we first lived, and where I worked on Mini – it was a home tour –

and then the next weekend it was off to Columbus to visit and shop, and…

back home, I stopped at JonesDay – where I used to work -and,

keeping on nostalgia, I attended a reunion at the end of September at Case Tech,

then that Sunday Sept 29 was a BIG day in local sports, with the Browns beating Cinci, and the Indians clinching a wild card,

– for which we had tickets –

we went to the game,

where great seats and a great atmosphere provided a grand experience (if not great results), and which led the next weekend  into our the fall travels around Valerie competing in the USDF Regional in St. Louis

(which we followed by travelling  through Illinois, Wisconson, and Michigan – above),  followed by a trip to Columbus to visit Valerie and her friends and husband

then since she qualified or the National championships at the Kentucky Horse Park we went there in early November,

where they did well, and the back to Columbus for a wedding of a friend’s daughter,

(on the same Saturday as Valerie’s national competition), and then back home where we attended a wake for a friend,

in the meantime, the ballroom where we took lessons closed,

I continued with politics and senior voice,

and Avon Lake Dems, and we

did some fall color cruises in the metroparks,

and concerts at Severance Hall,

in the meantime, Sharon sang with True North Chorale in the Sing for the Cure,

and of course Thanksgiving,

which is a gateway into the holiday season, which started on the 22nd with our fortieth anniversary party , where Sharon wore both her corsage, and her new diamond earrings (Tiffany’s ),

and a few days later xmas with family and friends,

and the a great NYE.

(N.B.: as the second – and final – sentence in this blog post, these activities were around 2 or 3 dance lessons per week, three gym work outs, and about 8-10 monthly meetings: more can be found by following it, and http://www.our1960mini.com)

After organizing and planning, I had a lunch mtg working on our 50th class reunion from Case Tech.

As it was 283K, I put the hood down on our 2009 MINI Cooper S Convertible, and enjoyed the freshness of fall here.

I stopped at the Promenade/Crocker Park, where I had coffee at Barnes&Noble, visited the Apple store, and shopped O Max.

On the way home, I picked up a prescription at a local CVS.

Sharon and I had dinner at Parkers in Avon Lake, I studied, and rode my bike for 30 min.

At the gym, it was back and triceps primary, abs, wrists, and calves secondary.

I went to Lorain with Ed and Nathan to pick up and tow back another mga.

Sharon and I ate at Max and Erma’s.

I trained at the gym – legs and shoulders, and then went home, where I waited for the cable guys while I washed, cleaned, and waxed Mini.

I was hoping to get it ready for our locobrits (Lorain County British Car Club) meeting, but the sky was darkening, and I ran into a problem with the door handle.

Ed Mayer graciously came over, and rescued me on the latter, and the skys cleared.

I made some calls for Senior Voice, and then off to the meeting, at Bullfrogs, in North Ridgeville.

Many members appreciated our efforts. 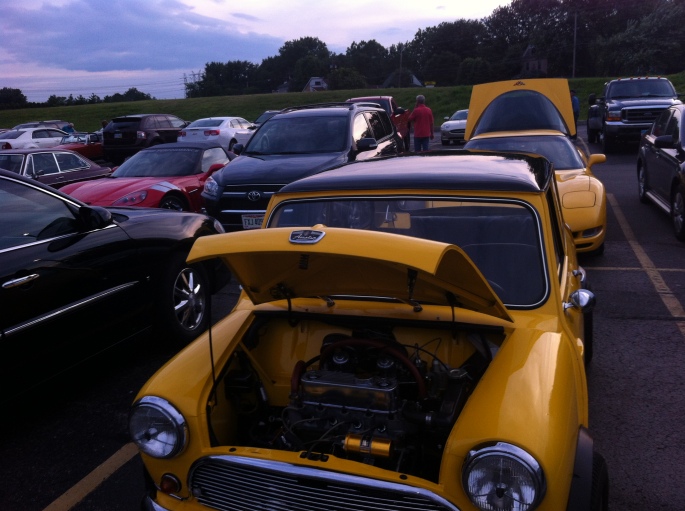 Back home, I studied Russian.

I made calls for Senior Voice.

Sharon had lunch with an old friend, I went to the Winner’s Circle to get some parts, had lunch at PJ McIntyres – where the bartender knew me from Fitness Edge, and then went to Superior Medical to get my PSA measured.

We had a dance lesson with Anya Kwan at Avon Ballroom – cha-cha, and rumba.

Then – since today is National Cheesecake day – we went to The Cheese Cake Factory – where I saw another man from Fitness Edge behind the bar.  http://locations.thecheesecakefactory.com/oh/westlake-93.html

Back home, Ed Mayer and I went for a little cruise to Huntington Park in Bay Village – he in his 74 Midget, me in our 1960 Mini.

I rode my bike for 30 minutes, and studied Russian.

I began the day with some (needed) organization, and then made some calls for Senior Voice.
Sharon and I ate at Ruby Tuesday’s, and then got haircuts from Kim Soto at Headquarters Salon.
We had a dance lesson with Anya Kwan at Avon Ballroom, and then rushed over to the Avon Lake Democrats Annual Summer Picnic, where keynote speaker David Pepper – our next attorney general – gave a great talk.

Back home, I studied Russian for  20 minutes, and rode the bike for 25.

Got a few things done on Mini, and then took the RTA train to public square, where we had a rally against chained CPI.

We ate at TGIF in Crocker, and shopped at Bed, Bath, and Behind.

I rode my Exercycle for 54 minutes.